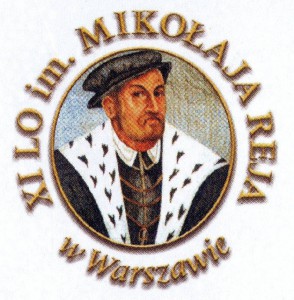 Mikołaj Rej XI High School in Warsaw was founded in 1906, in the building at Stanisław Małachowski Square, under the name of Mikołaj Rej Gymnasium. It was an eight-grade school for boys run by the Evangelical Church of the Augsburg Confession but open to students of various religions and promoting the spirit of mutual tolerance. The Latin quotation from Statius’ Thebaid was chosen as motto for the school: “Macte animo” – “Be bold!”, “Do not waver!”

Rej school’s traditions are humanistic. This is due to teachers of such rank as Professor Tadeusz Kotarbiński (1886-1981). In spite of many historical and ideological changes that occurred in Poland, the school retained its identity. The creation of a classical profile grade in 1982/1983 may serve as evidence of this distinctive identity. In 1990-2000 – with collaboration of the Institute of Classical Philology and the Polish Philological Society, a proprietary curriculum was launched and it has been continued since, with some modifications. A new subject, “Ancient Culture and Tradition” was introduced to complement Latin and Greek language courses. It was taught in the form of lectures by classical and Polish philologists and historians from the University of Warsaw. Among students of the classical grades, there are many finalists and laureates of Latin, Polish, foreign languages, history, knowledge about society, and art history Olympics. Since 2015 the classical profile has been developed under the patronage of the Faculty of “Arts Liberales”, University of Warsaw.

After 1989, the Pedagogical Board decided that a compulsory course focussing on the knowledge of culture would be added to the curriculum. The course was introduced in order to ensure that the students acquire a better grasp of culture – Polish, European, and global in the field of literature, art history, philosophy, and civic knowledge. Later, the knowledge of culture became a compulsory element of high school curriculum in the entire country.

Rej School’s students were encouraged to take up a diverse scope of activities: a newspaper was launched at the school, a student council functioned effectively, volunteering was being practiced, there was a School European Club, a theatre. Later, collaboration was undertaken with other organizations supporting school education: the Karta Centre, History Meeting House, King Jan III Museum in Wilanów, and so on.

For one-hundred-ten years, the Mikolaj Rej School’s goal has been to prepare students for intellectual independence, making mature choices, full participation in culture, taking part in social life and responsibility for self-development. In 1981, the school received the Medal of the National Education Commission in recognition of its didactic and educational achievements. In the school year 2015/2016, the school celebrates its one-hundred-tenth anniversary.

For more information see the school’s website and the fanpage of the classical profile.

Mythology is part of the curriculum of two subjects taught in the classical section: Latin Language & Ancient Culture and Mediterranean Culture. Students are introduced to the world of myths and Graeco-Roman legends not only through reading Mythology by Jan Parandowski, the great champion of Antiquity and Myths of Greeks and Romans by Zygmunt Kubiak, but also Iliad, Odyssey, and “Aeneid. We accompany the epic heroes, in particular Odysseus and Aeneas, in their travels and mark on the map the successive stages of their itinerary. We pay a lot of attention to the tales of heroes, to the image of man of the mythical period, in short, we reflect on what Homer teaches us. But we notice less what constitutes the bestiary of this mythical world and what lives in the imagination of every European who knows Greek myths. Moreover, children get to know Homeric epic poems in an order different from the one they were in fact created: first the adventures of Odysseus, then history of the Trojan war. The current project provides an opportunity to think about this phenomenon.

All “beasts” with whom students deal within the project, belong to Homer’s tales: centaurs, harpies, mermaids, Cerberus, Scylla and Charybdis. The first task in groups created for the project was to reach for the Homeric epics, then to verify what other ancient authors, Greek and Roman, say about each character, how they are represented by artists on vases. This stage became an occasion to compare childish images created based on fables told by parents, readings, and Disney movies with iconography produced by the ancients.

During the second stage, we looked for works by contemporary artists who transformed the characters of interest to us into heroes of their stories and works of art. The students were discovering that authors of films, games, and books, the sources of their knowledge about the “beasts,” used myths in very different ways, for instance, changing the nature of a character and its attributes, emphasizing a particular trait. We considered together the vivacity of these tales undergoing constant changes. We also attempted to establish which social, political, and cultural problems we would be able to present using specific myths. Students will show the results of their work on posters.

All school projects have many educational and didactic values. In addition to mastering team work skills, researching and selecting information, students who participate in the project indicate the following other benefits:

Cerberus (2012) by Maja Abgarowicz – illustration created at the workshop of Prof. Zygmunt Januszewski, Academy of Fine Arts, Warsaw. Copyright by the Author.
We use cookies to ensure that we give you the best experience on our website. If you continue to use this site we will assume that you are happy with it.Ok